Resident artists for 2022 were chosen with the help of a curatorial panel comprised of members of the FreshArts programs team and local creatives Kelly Johnson, YE Torres, and Miles Payne. 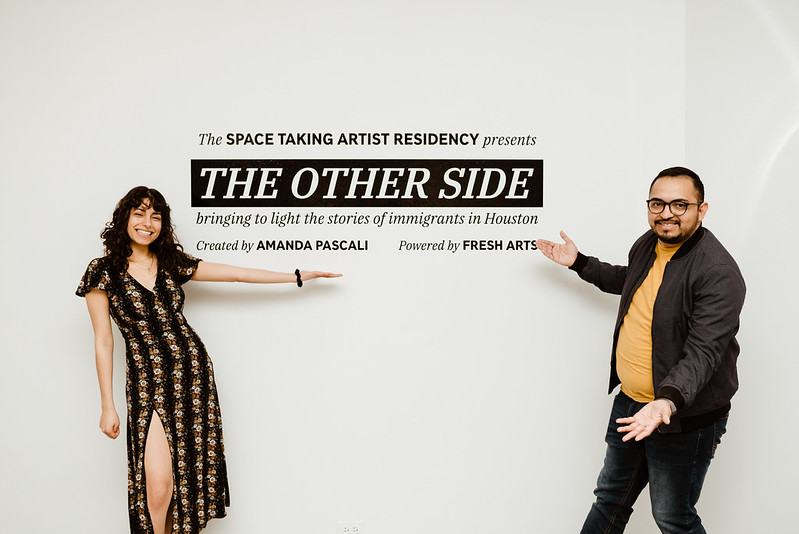 The Other Side: Bringing to Light the Stories of Immigrants in Houston

The Other Side was a continuation of the Immigrant American Folk Project created by bilingual singer/songwriter Amanda Pascali in 2020. This project used visual art to create a space where musical, literary, film, and lecture events were carried out by Pascali herself as well as other artists from Houston’s immigrant community. The walls of the Other Side were adorned with art by first-gen and immigrant artists as well as old recipes, poems, and letters donated by project participants who wished to share their family’s stories. Stacked suitcases in the space represented both the tangible and intangible things that Houston’s immigrants carried with them to America such as food, music, and ideas that became part of American culture through cultural diffusion.  See some photos from the Opening Reception or the Closing Concert.

ABOUT THE LEAD ARTIST:

Internationally acclaimed, bilingual singer/songwriter and 2021 Houston Chronicle “Musician of the Year,” Amanda Pascali was born in Queens, New York, and is based in Houston, Texas. Often referred to as a “young, female, and Italian Bob Dylan,” Amanda has released music and performed internationally, from the John F. Kennedy Center in Washington D.C. to packed houses in Italy, Romania, and across the Eastern hemisphere.

With a father who was thrown out of his home country for rebelling against the government, Amanda was driven from a young age to be a messenger of her family’s stories and diaspora. As the rising voice of America’s most ethnically diverse generation of young people, 23-year-old Pascali writes songs that speak to the experience of growing up as a first-generation American. Amanda’s music, now coined, Immigrant American Folk delivers a powerful narrative on being- “too foreign for here, too foreign for home, and never enough for both”.

MythoFutuRiddim is a combination of the words Mythology, Afrofuturism, and Riddim/music. The festival combines art, design, music and performances within a unique cultural dialogue that explores how artists use these themes to spark their creative process. This exhibition is the third in a series of nomadic grass roots projects focused on promoting early-career artists. With this exhibition and those that follow, Evans is committed to helping artists begin, develop, and sustain creative careers on their own terms. See some photos from Opening Reception or the Artist Talk.

ABOUT THE LEAD ARTIST:

As a curator, AC “Tony” Evans is deeply concerned with arts equity and artists rights. To that end, He leads Keyeser and Marie, a company which manifests opportunities for artists by creatively investing resources into the development of sustainable careers.

In addition to his work as a curator Evans is also an interdisciplinary artist and designer who creates projects that provide original commentary on global media consumption, culture and concepts of identity. He enjoys combining what may be perceived as contrasting mediums or genres into synergies of work that challenge traditional assumptions of art. 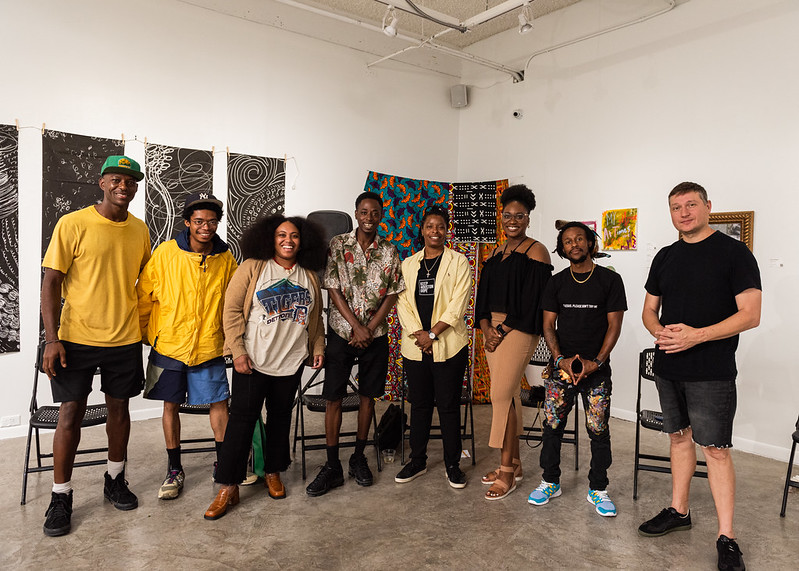 Closed all major holidays + the last 2 weeks in December.